I don’t know how moms can trust strangers with their babies.

When she was about two months old I tried to leave Fiona with a babysitter.  My husband and I were going to an opera preview at a friend’s house not far from where we live so we called a friend (former nanny) to watch her.  I was so stressed out that I had a miserable time and ended up coming home like an hour after I left. I couldn’t stay gone.  The thought of my little baby daughter alone with someone who was not me, freaked me out to the point that I just couldn’t handle it.

So I never left her alone again.

Needless to say, my social life took a massive hit.

Anyway, Fiona is now eight and a half months old and this time Hugh and I have a wedding to go to next weekend.  I am already having an anxiety attack.

So I have to ask, when does one become okay with leaving their child with a babysitter? I know that people do it all the time but I can’t imagine that they were always okay with it.  Is it the age of the child or the trust you have in the sitter?

This also leads me to the next point:  I am thinking of going back to work.  What happens then?  I know that most moms do go back to work and so they have to make alternate arrangements for childcare; but how do they? If I don’t feel ready at nearly 9 months to leave FIona with someone other than me, I don’t know that I would have been able to survive leaving her at 12 weeks…

Am I being crazy?  Is there something I don’t know?

Before Fiona was born I decided that unless there was a really good reason why Fiona couldn’t, that I would do everything in my power to make sure she was fed exclusively breast milk until she is at least 1 year old.  I had a back up plan (I still have a stash of Holle milk to prove it), but the reality was that having read the research, recommendations, and a lot of the information available to new mothers, I really hoped that I could do this for my daughter.

Maybe this doesn’t seem like an ambitious project to most people; however, Fiona is adopted.

As much as I would have liked to have a nursing relationship with my daughter, and had I been able to, I most certainly would have breastfed her exclusively until she weaned herself. Unfortunately, that wasn’t in the cards for us so I had to think outside of the box.

Years back I saw a picture of Salma Hayek breastfeeding an African child.  I remember looking at that picture and thinking to myself what an amazing woman she was for sharing her baby’s food with one who wasn’t as fortunate.   That image has always stayed with me.

I had heard about the existence of milk banks but upon further research, I found them to be cost prohibitive in the long term. Not to mention that in most cases we didn’t qualify due to the fact that Fiona was neither in the NICU nor had any kind of special need.  Hell, she wasn’t even born when I was making these inquiries!  But like they say, when God closes a door he always opens a window because it was during this time that I first heard of community breast milk sharing.

“It takes a village to raise a child.”- African Proverb 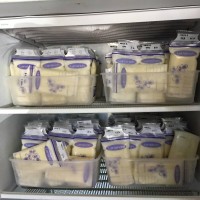 Every passing day that saying becomes more and more true for our family. Thanks to some amazingly generous mothers I’ve connected with through Human Milk 4 Human Babies and Eats on Feets, Fiona has been fed exclusively breast milk all 8 months and 1 week of her life and is well on her way to make it to the goal of 1 year I had originally set for us.

Now, I’m not judging those who don’t place as much importance on breastfeeding as I have.  Still, i think the option of milk sharing should be included in the conversation for moms who do feel breastfeeding is important and who, like me, can’t breastfeed their children, and those who produce far more milk than their children can consume.  This can make a world of difference in the life of a child.

Before Fiona came along, our dog Sophie was our baby.  We adopted her two years ago and just as we saved her life, she changed ours.  It was easy to fall in love with her cute face and her sweet disposition.  I lovingly called her my assistant because wherever I went, there she was.

I think Sophie made her position clear when she peed on the carpet in front of Fiona’s crib.

She knew that she was no longer the “only child” and she didn’t like it. 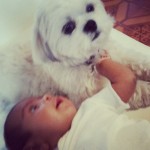 Not only do I now have two assistants, Sophie and FIona are slowly but surely becoming partners in crime, and I am confident that Fiona will grow up to be a better kid because of Sophie.

To those who have hesitations about adopting a shelter dog because they worry about how they might interact with their small children, I urge you to give them a chance.  Sure, exercise common sense, but know that there are some amazing dogs of all ages and breeds in desperate need of a forever home. 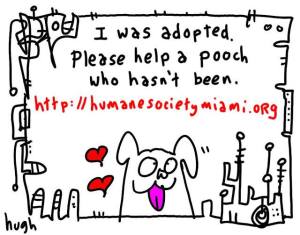 Follow It's Fiona's world…we just live in it. on WordPress.com
My #squad .